This is an AUTOBIOGRAPHY of LANGSTON HUGHES WRITTEN IN FIRST PERSON Point of view!

Here is his PICTURE! 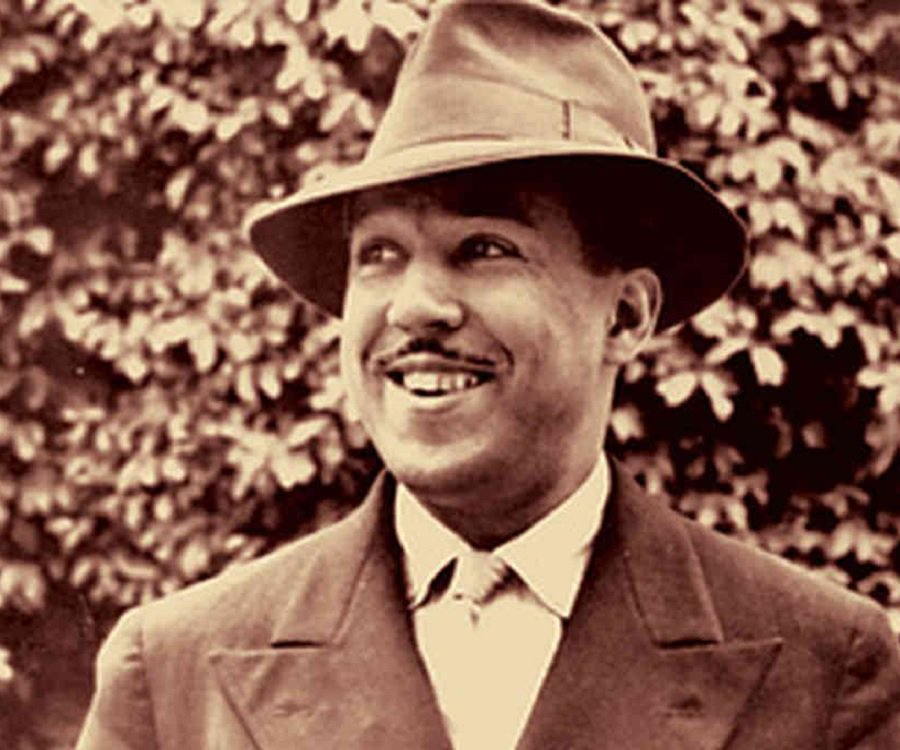 American author Langston Hughes, a moving spirit in the artistic movement of the 1920s often called the Harlem Renaissance, expressed the mind and spirit of most African Americans for nearly half a century.

Langston Hughes was born in Joplin, Missouri, on February 1, 1902, to Carrie M. Langston and James N. Hughes. His parents separated soon after his birth, and Hughes was raised mainly by his mother, his grandmother, and a childless couple, the Reeds. He attended public schools in Kansas and Illinois and upon graduating elementary school, Hughes was named class poet, although he had never even written a poem. That title sparked an interest in writing poetry.

Hughes graduated from high school in Cleveland, Ohio, in 1920. His high school companions, most of whom were white, remembered him as a handsome “Indian-looking” youth whom everyone liked and respected for his quiet, natural ways and his abilities. He won an athletic letter in track and held offices in the student council and the American Civic Association.

In high school Hughes was introduced to the works of poet Carl Sandburg (1878–1967), another poet from the Midwest. Also at this time, Hughes himself began writing poetry and developing his unique style. He began submitting his work to magazines, but all were rejected.

Hughes spent the year after high school in Mexico with his father, who tried to discourage him from writing. But Hughes’s poetry and prose (writings) were beginning to appear in the Brownie’s Book, a publication for children edited by W. E. B. Du Bois (1868–1963), and he was starting work on more ambitious material for adult readers. The poem “A Negro Speaks of River,” which marked this development, appeared in the Crisis magazine in 1921. Hughes returned to America and enrolled at Columbia University in New York City. Meanwhile, the Crisis printed several more of his poems. Finding the atmosphere at Columbia unfriendly, Hughes left after a year. He took on odd jobs in New York, and in 1923 he signed on to work on a freighter (a large ship). His first voyage took him down the west coast of Africa; his second took him to Spain. In 1924 he spent six months in Paris, France. He was relatively happy, produced some prose, and experimented with what he called “racial rhythms” in poetry. Most of this verse (poetry) appeared in African American publications, but Vanity Fair, a magazine popular among middle-and upper-class women, published three poems. Later in 1924 Hughes went to live with his mother in Washington, D.C. He hoped to earn enough money to return to college, but work as a hotel busboy paid very little, and life in the nation’s capital, where racial tensions were fierce, made him unhappy. But he was able to write many poems. “The Weary Blues” won first prize in 1925 in a literary competition sponsored by Opportunity, a magazine published by the National Urban League. That summer one of his essays and another poem won prizes in the Crisis literary contest. Meanwhile, Hughes had come to the attention of Carl Van Vechten, a novelist and critic, who arranged publication of Hughes’s first volume of poetry, The Weary Blues (1926). This book projected Hughes’s lasting themes, established his style, and suggested the wide range of his poetic talent. It showed him committed to racial themes—pride in blackness and in his African heritage, and the everyday life of African Americans—and democracy (government ruled by the people) and patriotism (the support of one’s country). Hughes transformed the bitterness which such themes generated in many African Americans of the day into sharp irony and humor. His casual, folk like style was strengthened in his second book, Fine Clothes to the Jew (1927).

Hughes had resumed his education in 1925 and graduated from Lincoln University in 1929. Not without Laughter (1930) was his first novel. The story portrays an African American boy, Sandy, caught between two worlds and two attitudes. The boy’s hardworking and respectable mother provides a counterpoint to his energetic, easygoing, footloose father. The mother is oriented to the middle-class values of the white world; the father believes that fun and laughter are the only things worth pursuing. Though the boy’s character is blurred, Hughes’s attention to the details of African American culture in America gives the novel insight and power.

The relative commercial success of Not without Laughter inspired Hughes to make his living as an author. In 1931 he made the first of what became annual lecture tours. The following year he took a trip to the Soviet Union, the former country that today consists of Russia and other smaller nations. Meanwhile, he turned out poems, essays, book reviews, song lyrics, plays, and short stories. He edited five books of African American writing and worked with Arna Bontemps on another and on a book for children. He wrote some twenty plays, including “Mulatto,” “Simply Heavenly,” and “Tambourines to Glory.” He translated Federico Garcia Lorca, the Spanish poet, and Gabriela Mistral (1889–1957), the Latin American Nobel laureate poet, and wrote two long autobiographical works (a biography about oneself).

As a newspaper columnist for the Chicago Defender, Hughes created “Simple.” This enduring character brought his style to perfection and solidified his reputation as the “most eloquent [fluent and persuasive] spokesman” for African Americans. The sketches of Simple, collected in five volumes, are presented as conversations between an uneducated, African American city dweller, Jesse B. Semple (Simple), and an educated but less sensitive African American friend. The sketches that ran in the Defender for twenty-five years are varied in subject and remarkable in their relevance to the universal human condition. That Simple is a universal man, even though his language, habits, and personality are the result of his particular experiences as an African American man, is a measure of Hughes’s genius.

Hughes received numerous fellowships (scholarships), awards, and honorary degrees, including the Anisfield-Wolf Award (1953) for a book on improving race relations. He taught creative writing at two universities; had his plays produced on four continents; and made recordings of African American history, music commentary, and his own poetry. He was elected to the American Academy of Arts and Sciences and to the National Institute of Arts and Letters. His work, some of which was translated into a dozen languages, earned him an international reputation. Forty-seven volumes bear Hughes’s name. He died in New York City on May 22, 1967.